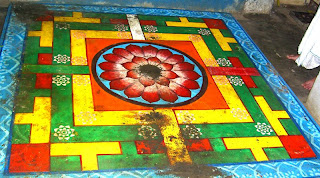 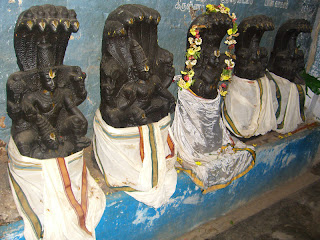 5 different Vahanas of the Lord 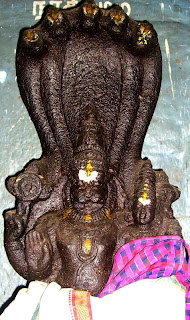 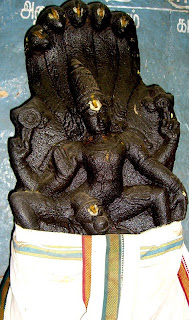 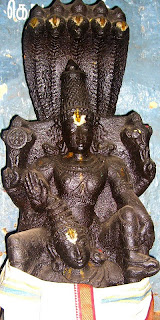 The Temple of Lord Ranganatha is the only follower of the very ancient and rare Parameshwara Samhita (one of the scriptures from the Pancaratra canon), with a very elaborated and detailed worship on festivals. Also it has some differences in mantras used for worship. Therefore i thought the initation ceremony for the priesthood in Srirangam are also very interesting. In their Diksha temple of Lord Rama, they have also 10 different forms of the Lord. Those are Matsya (Fishincarnation), Kurma (Turtoise incarnation), Varaha (Boar incarnation), Narasimha (Half Man/half Lion), Balarama and 5 different Vahanas (carrying vehicle) like Krishna dancing on Kaliya, Lord Vishnu on Garuda, Hanuman, Horse and elefant. The priest disciple will get the Diksha and the mantras for those seva*/puja to Lord Ranganatha from his Guru/Father after the sacraments of Panca samskara (see next blog). For this Diksha ceremony there is a special room, called Dhyana Mandapa. Inside this room, the disciple will get the very confidential instructions, Mantras and practical advises from his Teacher. Also he is asked to do Japa for the Holy Mantra he recieved from his Guru, to recide inside for a certain time frame. But before this, he will be tied up with 3 colour string representing the 3 moods of nature and blindfolded overnight. Then there will be certain homas for samhara- and sristi- nyasa (called also Bhuta shuddhi, to purify the body of the priest from bad karma/ make it fit for the service inside the temple sanctorum). After this he will be untied and auspicious items will be shown to him. That opening of the Mayasutra (string of illusion) is considered to be rebirth, and the 5 samskaras will be given to him as well. Tapa mudra/ brandings of shanka and chakra on each shoulder to mark him as a servant of the Lord. Mantra/ the soundvibration in which the Lord is fully manifest, also called the Tiru (sacred) Mantra. Urdhva Pundra/ tilak - 12 holy marks made from clay, chandan or kumkum/haldi will be paint on special Nadi parts (energy spots,like chakras) to represent the body as the house/temple of the Lord where He (Lord Vishnu) resides as Antaryami(supersoul). Nama - special name to indicate him as a servant of the Lord. The Nava Padma Mandala will be worshipped, and the disciple will put a flower blindfolded on the Mandala. Inside the Mandala there are 12 places, each infused with one form of Lord Vishnu. After he drops the flower on the Mandala, that spot connected with one of the 12 Names of Lord Vishnu will be given as his Archaka Name like Madhava, Keshava, Narayana etc... (Bhattacharya will be a common title to indicate that he is a priest). And the final samskara: Yaga/ worship.The practical way will be shown and teached to the disciple. After all this he is eligible to perform puja inside the Temple complex. Of course there are more rules and standards to be a good priest/brahmana, and Bhagavad Gita has a good sloka for this (Chapter 18, Vers 42).
Keine Kommentare: Links zu diesem Post 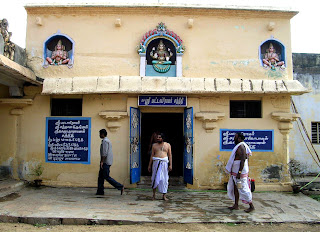 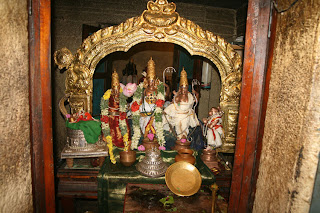 Lord Ramachandra with his consorts 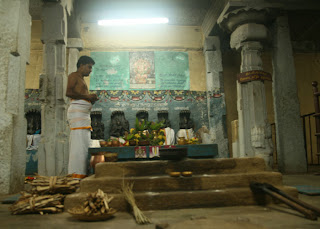 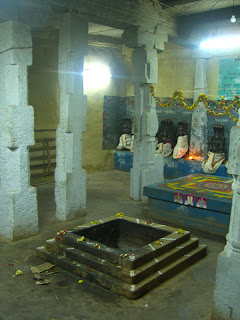 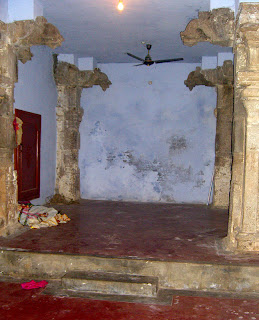 Dhyana Mandapa inside the Pancaratradiksha Temple of Sri Rangam


This Lord Rama Temple is not far away of the suryapushkarini (a big watertank in the form of the sunglobe, used for anual brahmotsavam festivals) north side of the complex, next to the Vaikuntha Dwara (Door). Today this temple is used for the "pancaratradiksha" Ceremonies, to install the next generation priests for Lord Ranganathas service. The initiation ceremony takes normally 2 - 3 days, and are done in privacy, without public audience. But to the ceremony later... The temple was once upon a time only a Mandapa (pillar hall), and when the temples were destroyed by the muslim invaders, deities where coming from other places to Sri Rangam island, to be protected from this onslaught of iconoclast. This Mandapa was transformed into a shrine for Sita Rama Lakshmana and Hanuman. As the priest of Sri Rangam required a secluded place for their initiation ceremonies, this place was perfect to serve the required need. Now it has a Yagna spot, with a very deep Homa Kundam, a Mandala sthana, a sanctum sanctorum of Lord Rama, Dhyana Mandapa (secluded room), a nice Kitchen with a garden and a ancient waterwell. Next to the Homa kundam we have 10 special Murthies installed (see next post...)
Keine Kommentare: Links zu diesem Post 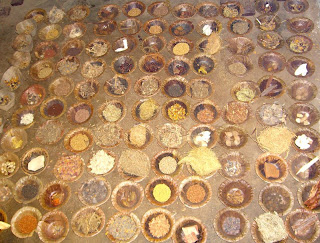 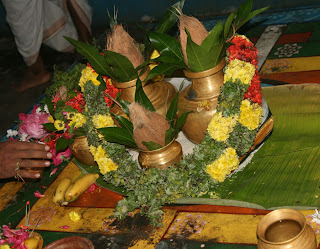 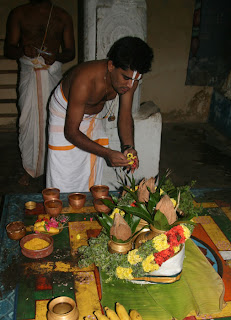 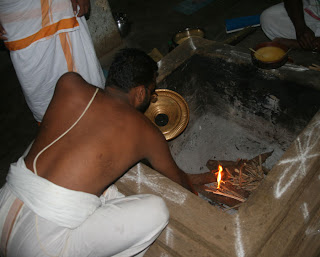 installing Agni inside the Homa pitha 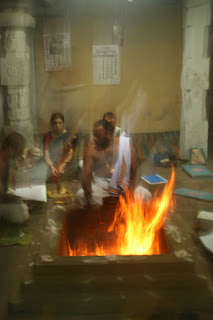 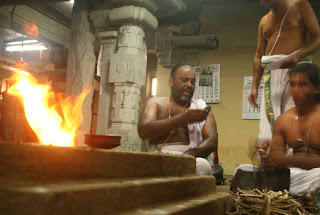 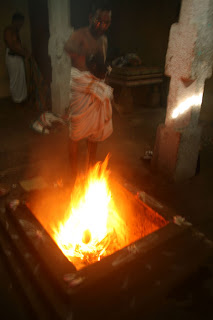 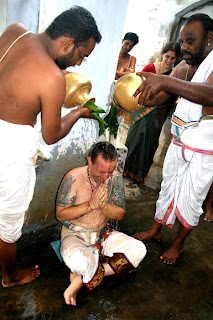 while coming back from Rameswaram we did few pujas/Homas with our group from Murali Bhattar (the mainpriest of Lord Ranganatha), some Sudarshana-, Dhanvantari-, Narasimha Homas. We start first with Punya vacanam and vishvakshena Puja, then Kalasa stapana (on this picture we did install Lakshmi Narayana inside the Kumbhas). Then igniting the Fire and installing Lord Vishnu inside. Sudarshana will be worshipped with special herbs as well Dhanvantari (see the leafcups filled with sandelwood, kasturi, cloves etc..). Mahalakshmi is worshipped with red lotus, ashwatta tree sticks and honey and Narasimha is done with different sweets. Purna Huti and the final bath with the water from the Lakshmi Narayana Kumbhas are done in the backyard of the Rama temple inside the Ranganatha Temple complex. Here are some impressions on them...
Keine Kommentare: Links zu diesem Post 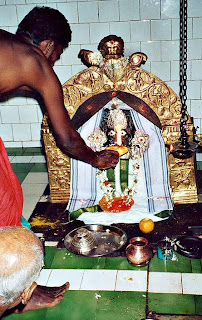 Malola Narasimha tour is on the road again...

due to the broken computer and the loss of a lot of informations i did not see the internet for a long period (hauuuuuuuuuuu it comeeeeeeee???)... anyhow here we are again and we will start were we left, going back in february 2008 when we made our tour trough Andhra Pradesh. We visited Mantralayam, Ahobilam and Tirupathi, so get ready for this in the next few days!