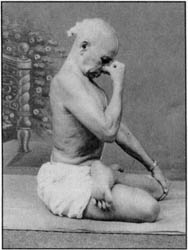 In the Yoga Sutras of Patanjali eight stages are declared to be most important to practice, and the fourth - the middle one, PrAnAyAma, is very important to give your yogapractice a healthy and long lasting platform. Unfortunate it is almost lost in most of the yogaschools to teach that great practice, due to lack of interest or ignorance. It may also has to do with the focus Yoga asanas are be taught in western schools, as they dont want to develop spiritual practice instead just a good, healthy lifestyle.
PrAnAyAma is not a idle practice of Patanjali Yoga sutras, but also found in pancaratra, tantric texts as well found in vedic rituals like sandhyavandanam. We find up to 13 different prAnAyAmas there, all mainly in sitting position (but those may differ in calm or more extreme positions) and go along with recitations of mantras of a particular deity which one prepares to worship. There has been bjiaksharas (rootmantras) for each deity, which can be used for prAnAyAma in different count systems. Main idea is to regulate the inflowing and outflowing air by keeping the filled lungs or empty lungs under count, and purify by this not just the energetic centers (chakras), but also enhance the many Naadis (chanels of power inside) of the physical and mental body. Also raising the kundalini lifeforce from the Muladhara Chakra is one of those different practices by upasakas.
Along with this a more unknown practice of Mudras are to be taught. Mudras are seals, not handgestures as we know of the ritual texts. They are connected with the PrAnAyAma practice, and will do give fast results of yoga asana, if done under a good teacher.
Both Pranayama and Mudra should be learned as first by a personal Instructor/teacher of Yoga, as he him self has learned that practice by a living teacher too. Reading it from a Book is not enough. Escpecially if it comes with mantra practice, which makes the counting, holding breath and meditation most difficult for the aspirant.
Keine Kommentare: