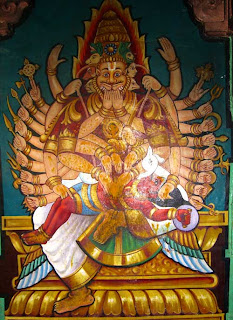 Asta Mukha Gandha berundha Narasimha painting. Rare indeed, as this form is not very known to the people as well to the Vaisnavas it self. But in the area of sri Rangam one finds 3 wall paintings of the Narasimha form one with 16 hands the other one with 32 hands. Lord narasimha is shown killing the demon hiranyakashipu and the form of shiva named sharaba, as this story goes that shiva wanted to stop Narasimha and show his supremacy, but Lord Narasimha killed this form of shiva and became only passified when Laxmi appeared as female Lion (Narasimhi also known as Patyangira). Those stories are not found in the common Bhagavatam/Puranas but only in scriptures like Narasimha Purana, and some Upanishad giving some hint to that.
anyhow that Form is worshipped only in two spots (as far i know) one in Yadhava Giri Gutta inside a cave, and in mangala Giri on top of the Mountain. We have recieved a deity form of the Lord, but he has to be installed very soon. Then we will post some pictures here.
Jaya Jaya Narasimha!!!
Jaya Jaya Narasimha!
Keine Kommentare: Links zu diesem Post 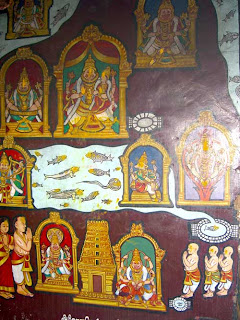 here we see a painting of Ahobilam Ksetra with all the 9 temples of Narasimha. Also this one painting is a ancient one, and one see different forms according to the temples there! also great place to visit!
Keine Kommentare: Links zu diesem Post 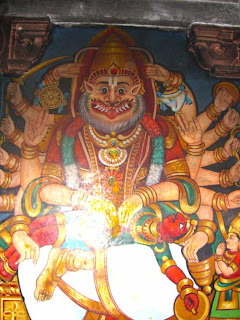 the temple inside has wonderful paintings on the wall, who where restaurated recently not so bad (i have seen sometimes crazy restorations, but this one looks ok. But all the detail paintings on the deity has disappeared, and also the use of the new colour is pure chemicial, as the old one was still made from plantpaint).
Here Ugra Rupa is shown nicely, and in this temple Svathi Naksatra and Pradosham is perfectly done (special pujas on special days holy for the worship of Lord Narasimha).
Keine Kommentare: Links zu diesem Post 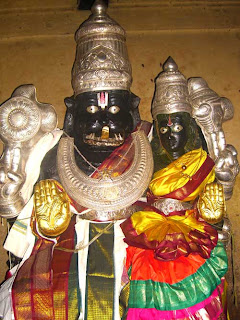 This is a very ancient Deity of Lord Narasimha and he was even before Lord Ranganatha came to this island here. As he was the principal deity in the last Kalpa and his mantra was chanted as the Yuga Dharma* (the duty one has to do for getting released from the material world) he is still much worshipped in India, but specially in south. In sri Rangam existed 4 main Narasimha deities protecting the area from the main directions, south on the other side of the Kaveri river you find a ancient Laxmi Narasimha (right now in renovation), in west you will find a yoga Narasimha inside the gopuram), in north you will find next to the thayar shrine on a elevated temple structure a very beautiful Ugra Narasimha (not well maintained from a greedy priest) and in east you find this kattigar (Forest) Lakshmi Narasimha Temple. The deity is huge and more then 2 meters high!
Keine Kommentare: Links zu diesem Post 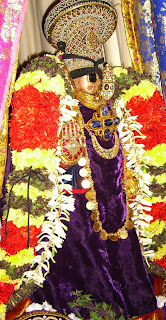 and what you can expect right now?? Yes the Utsava Deity Namperumal (tamil translated means "Our Lord" as he was hidden from the Muslims and came back only after 80 years from exile, and he was reidentified as Our Lord* Ranganatha!!). Very very sweet Lord, and he always gives blessings! Take shelter unto his Lotusfeet, as even Lord Chaitanya did when he was visiting Sri Rangam 500 years ago!
Keine Kommentare: Links zu diesem Post 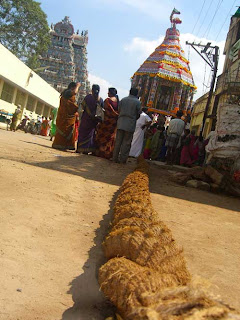 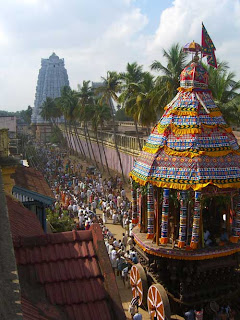 on our stay in sri rangam we had also the chance to be there for the brahmotsava with the big Ratham (chariot).. and it took almost the whole day until the chariot was back on his original place near the entrance. BBC television was also there and made some good snaps from the roof. We sneaked along with them and where able to make some good pics from the roof next to the main street over the festival. While the ratham was going on, no one was allowed to visit the Mula Ranganatha inside the sanctum as everyone should pull the Ratham (and get Moksha* means devotional service for the Lord)! See the next pic with the huge robes... but anyway maya has a much bigger robe for you to tie you on this world, be sure that you pull the chariot next time you visit Ratha yatra!
Keine Kommentare: Links zu diesem Post