white elefants get into upanayana ceremony! 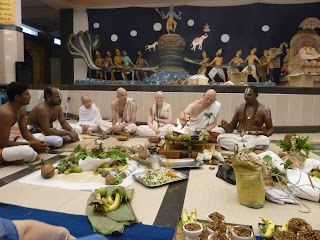 how mysterious is Lord Sri Krishna for his devotees? Breaking the boundage of cast and religious prejudice - that shows even the concept of cast in india can be transformed to a good and healthy system for better livin on this earth!
Here you see a complete vedic grhya sutra ceremony (preserved only for the socalled 3 upper casts with birth rights) done for a two gurukulis from england. Is it that the old english men of indiology did teach us that this system of Jata (Cast) cannot be given to people outside??? Does those early christian invaders with their bible in the hand, got everything wrong from the vedas just to overpower the eastern "harmony of consciousness" into the western "survial of the fittest" theory?
Brutal is the history of inquisition in Goa and other parts of india, resulting in blocking western born people out of vedic teachings.
Only in recent years of the last century things has changed, and by the grace of highly advanced saints like Srila Prabhupada and other yogis, people from the west were introduced to vedic wisdom. Hope we westerners will not mess up things again, and take those invitation back to the original tradition of humans with great respect and high spirit.
Keine Kommentare: Links zu diesem Post