9 shrines of Lord Narasimha in Ahobilam 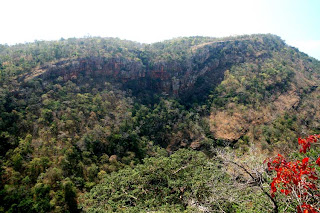 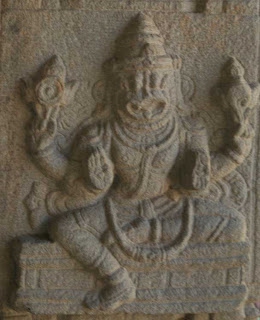 Ahobilam is divided into two places, lower and upper Ahobilam, were all the 9 temples of Lord Narasimha are situated. In Lower Ahobilam we can find 3 temples and in Upper Ahobilam you can find 6 Temples. We will cover each temple and give some background infos if possible. The Main temple of Lord Narasimha is in Upper Ahobilam, were Lord Narasimha revealed him self after a prayer request of Garuda to give Him Darshana in His samhara (destroying the evil) Rupa (Form). Here on this pictures you can see one of the two mountains, were Garuda did penance. He is even formed like a Garuda, therefor it is called Garudadri. On that mountain you find 3 temples (ahobileshwara, Karanja Narasimha and Pavana Narasimha). The other side you have the Vedadri mountain. There you find 3 temples as well (Varaha Narasimha, Malola Narasimha, Yoga Narasimha cave, Jwala Narasimha and Ugra stambha mountain).
Keine Kommentare: Links zu diesem Post

ahobilam from the ages... 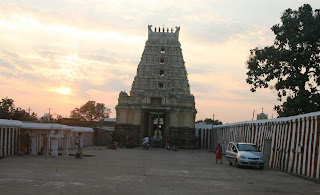 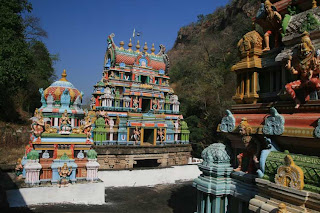 Ahobilam Dhama is a very ancient spot of worship of Lord Narasimha (Lord Vishnu). Mentioned in Matsya Purana, Brahmanda Purana and Vishnu Purana. Beside of those proof of anquitity, great saints have visited and left their special flavour to this place. One of the great Alwars, Tirumangai Alwar (Nila), has sung one very special pasuram on this ksetra (the translation will be given later in the blog here). Also Chaitanya Mahaprabhu, the founder of Gaudiya Bhakti Tradition, had stayed and showed very much affection to the Lord here (see Madhya Lila 2, of Chaitanya Caritamrita). Beside of Him, Sri Madhvacarya and Sri Ramanuja, Manavali Mahamuni and other great saints had come and worshipped the Lord here. The total spot of Ahobilam Ksetra is more then 25 km in area, with thick forests and high mountains. It is said, that this very spot of Ahobilam, was once the place of the demon king Hiranyakashipu, and he had his very opulent palace built in this place. His son, sri prahlad, was a great bhakta of Lord Narahari, and for this he was hated by his father. When the father fed up with the devotion of his son, he decided to kill his own son, the Lord appeared from one of the palace pillar, to save his devotee. Nowadays one of the very remnains of the palace is the pillar only. You have to track for more then two hours to reach from upper ahobilam to this very mystical spot in the middle of the jungle. Beside of this, there are 9 famous Narasimha temples, each one unique, as the Lord shows different aspects of Him there. More then 20 water kundas in and around the forests and a very blissful track inside the jungle is awaiting the pilgrim.
Keine Kommentare: Links zu diesem Post 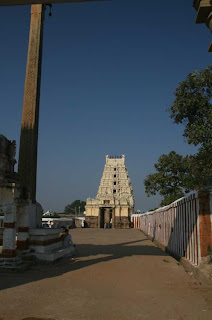 Now we will have a whole series on Ahobilam with pictures made recently from our last visit in march 2008. stay tuned, dear friends... this first picture is the temple of Lord Narasimha in lower Ahobilam, Sri Prahlada Varada Narasimha, who will welcome you when you enter into the Ahobilam ksetra of 9 Narasimha Temples!
1 Kommentar: Links zu diesem Post 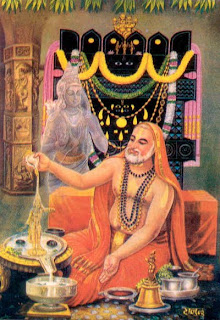 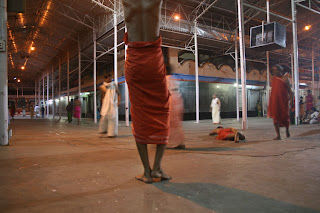 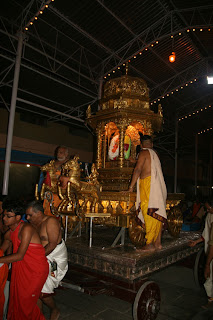 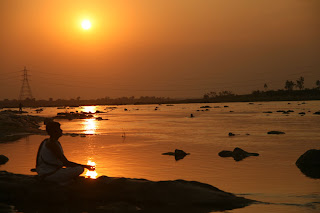 The spot of the Brindavan (samadhi) of Sri Raghavendra in Mantralaya, is the very ancient place of Narasimha worship. It is said that Sri Prahlad did his personal puja/Homa to Lord Narasimha here. He performed a very long and beautiful Homa on this spot were now the Samadhi of Sri Raghavendra stands. Sri Ragahvendra Swamy was a great saint from the 17th century, who performed great miracles in the service of Mankind. Anyone interested in his fantastic devotional life, should read the 7 book releases (in english) on sri Raghavendra Swamy by Amman Sathiyanathan. The original book "Sri Raghavendra Vijaya" comes in sanskrit, and is written in a poetic way. A really beautiful book collection, and it gives many views on different angles of Dvaita Philosophy (Madhvas teachings), saints of this sampradaya, stories etc...
One of the striking info is that Sri Raghavendra Swamy took alive the samadhi, while filling the samadhi with over 1200 Salagramas. It is said that Radhavendra Swamy is still alive and doing the puja to Mula Rama Deities very early morning. The priests sometime can hear the bell, people have visions on him even today, and i had a very mystical experience while i came here first time.
Keine Kommentare: Links zu diesem Post 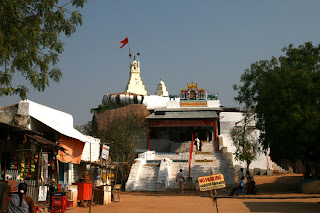 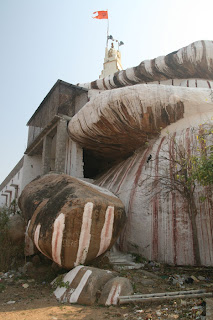 The meditation cave of Sri Raghavendra Swamy in Mantralaya is very mystical and wonderful to visit. Sri Raghavendra Swamy had done his tapas/sadhana here for more then 12 years on Hanuman and Narasimha. Sri Panca Mukhi Hanuman appeared in one of his dreams and blessed Him with his darshan. Next morning he woke up, and saw next to his sitting asana a self manifested Pancamukhi Hanuman coming out from on one of the rocks! Later one this Cave was turned into a special temple, and some near by living disciples of Sri Raghavendra Swamy where employed to do the daily seva. That happen all in the 17th century AD, and from those days every morning Panca amrita Abhisheka (5 different liquids) with five different Salagramas representing each Face (Narasimha, Garuda, Hanuman, Varaha and Hayagriva), are worshipped here. please visit that place, as it is very calm, peaceful and not very over crowed still! It is in Andhra Pradesh, near to the border of Karnataka.
Keine Kommentare: Links zu diesem Post

this video was shot inside the sanctum sanctorum by a friend of mine, Keshava. It is not very easy to see but one can imagine the pancamukhi hanuman on the Rock. Sri Raghavendra Swamy did penance here, and Lord Hanuman appeared from this rock to be worshipped by him. The temple structure is just a huge bulk of rocks, where one finds a walkable way trough some holes to enter inside the middle as a Cave. A very interesting place indeed. For both sadhakas and visitors!!!
Keine Kommentare: Links zu diesem Post 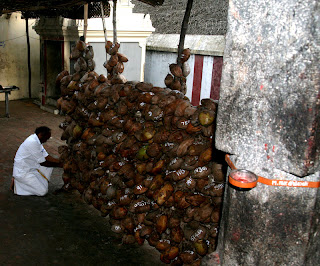 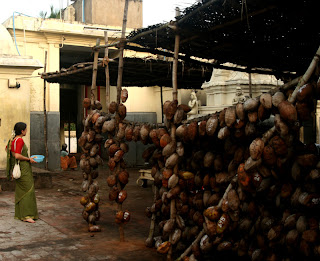 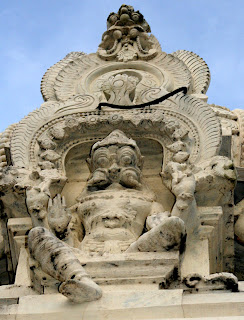 There is a ancient Village near Kumbakonam, where a famous Yoga Narasimha Temple resides. People go here for getting relief from mental and physical problems, as the Lord answers every ownest and humble prayer here. People come here, do some puja and invoke inside a coconut the prayer of relief. After of 48 days they come back, do another puja and remove the coconut. Miracle happens and Lord Narasimha cures the problem. Here on the pictures you see the hundred's of coconuts hanging... like big Karma bag in front of the temple...
Keine Kommentare: Links zu diesem Post 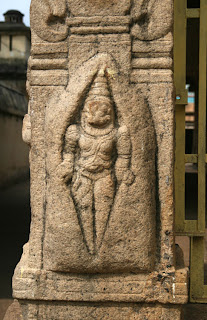 The Lord hides in every pillar, so be aware about it!
Keine Kommentare: Links zu diesem Post 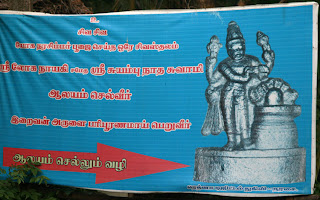 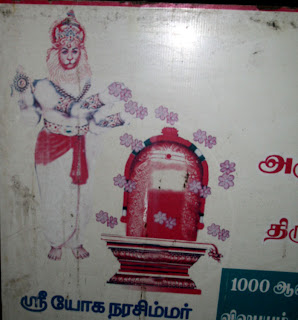 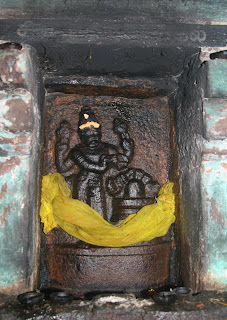 Not far from this famous Narasimha Temple in the village "Narasimham", is one very old but dilapidated Shiva temple. To get some attention of the stream of Narasimha bhaktas over the centuries, it is now with a big billboard advertised that "Lord Narasimha had come to this near by Shiva Temple to worship Shiva, to get released of the sin of killing the king Hiranyakashipu (even he was a demon). So if Lord Narasimha himself had done so, you as his bhakta should do the same, and visit this temple". From the Narasimha temple it is not very far (walkable distance), so i made it to see what it is all about.
The Shiva temple with a big gopuram is in a very bad condition, as his walls and towers are all fall apart.
Inside the temple complex, full of bats, loose bricks and garbage everywhere. Felt very much greef to see such old and beautiful temple in such a condition, neglected by his devotees. Most likely this temple comes from the Chola time (around 100 years old), built by rich kings of those days. The Shiva Lingam is very big, but no opulence worship is done here today. We can be happy if he gets once a day some puja. But the Linga it self looked very majestic, huge in form and beautiful shiny! Just next to the sanctum sanctorum, you will find a carved scene stone slap, were Lord Narasimha is worshipping this shiva Lingam. It is a old carving for sure, and it might come from the time were the two sects were fighting over the supremacy of each deity.
To me it looks more like a addition to the general understanding of Shiva/Vishnu relationship in the Vedas. Normally Shiva is worshipping Lord Narasimha with the Mantraraja (great King of Mantras, Mahamantra of Narasimha), and praises like Mantrarajapadastotra, Rudram (who are the personification of Lord Narahari, NOT Shiva) and Chamakam are proofs of this. Beside of the pancaratra samhitas, where you will find the teaching of Mantras on Narasimha made by Shiva to his wife Parvati. Of course you will find Shiva puranas, were the opposite is teached. Beside that, those puranas are not considered as very authoritative by vedic scholars, the final understanding of most shivaits is that the unpersonal brahman is above shiva and Lord Vishnu. So then why fighting over those issues, if in the end you have to give up this concept of service/worship anyway? On the other hand, vaishnavas would rather rott in hell, then give up the service to Lord Vishnu. That makes a distinct difference between the worship of those two sects.
1 Kommentar: Links zu diesem Post 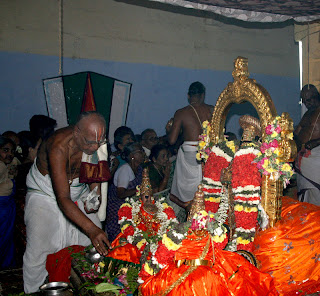 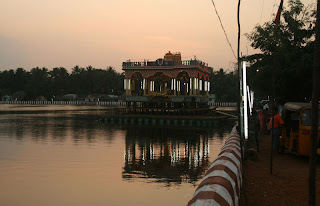 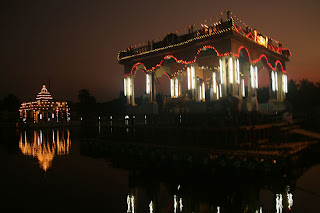 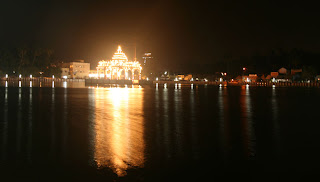 One of the highlights in the 9 day Brahmotsavam Festival is the Boatfestival, were Lord Ranganatha is taken on the Big watertank to enjoy with his Devotees. Many of the servants jump inside the water, along the boat and get wild. By sunset Lord Ranganatha is worshipped in the middle of the "Super big watertank", and most of the srirangamvasis offer their worship from the other side of the tank. A very special occasion, indeed!
Keine Kommentare: Links zu diesem Post