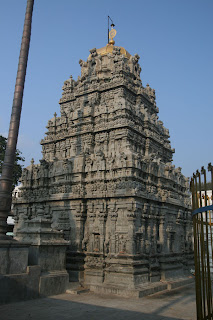 Kurma Ksetra is a beautiful place up in the north of Andra Pradesh, not far from the Orissa Border. It is a place of antiquity and has a very special history. Once upon a time this Kurma Deity was worshipped as a Shiva Lingam, as it was in the hands of shaiva pandits for some time after the buddhist tradition had left orissa and the area connected to it (around 3th AD century). It is said also that Sri Sankaracarya (7th century) had come here and established the pujas according to his belief. 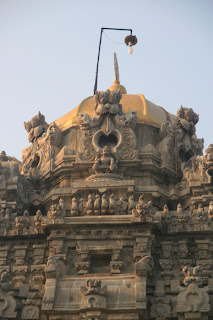 But in the Mahatmiya scripture (ancient writings about the history of the particual place) it is mentioned that on Ekadasi day there was a strong prayer by one of his devotee to save him from breaking its vow of full fast. As Sri Kurma is worshipped to mantain any vow (vrata) and stability in spiritual practise He promissed to protect her. He appeared in front of her in his Murthy Form and was worshipped by all different subtle higher beings of this Bhu Mandala region and later on a special temple was built around Him.
In the years of the 11th century Sripad Ramanujacharya visited north india and came also to Orissa were the famous Sri Jagannath Puri city is situated. In one book by the name "Prapannamrta" chapter 36 a story of Sri Ramanuja and Lord Jagannatha is given. "When Sri Ramanuja saw the way the pujaris were worshipping the Jagannatha deity, he was thinking that it was not according to Vaishnava tradition, as this God represents Lord Vishnu indeed. He explained to them the rules and regulations according to Pancaratrika Vidhi, and the whole priesthood of the town became upset with the situation. They were doing the puja according to the rules set by Sri Shankaracarya in the mode of pancayatana ritual (5 principal Gods on equal level) and other secret tantras from their line of ancient code of Sarabas (herdsmen of pigs, goats etc.). A mystical story tells that same night after he instructed them, Lord Jagannath appeared to Ramanujacharya in his dream, right there in Puri, and told him, “I am very satisfied with the love and devotion in which my pujaris are worshipping Me. I don’t want you to change it.” Therefore that night Lord Jagannath personally threw Ramanujacharya to Kurmakshetra. 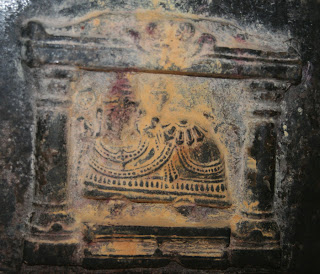 So when Ramanujacharya woke up, here he was in front of the deity of Kurmadev. He thaught it was the divine command of Lord Jagannath that he had come here and began to fast. Then he recognised that there was a head and a tail, little feet and not a Shiva Lingam as it was worshipped. So he could convince the priests to establish the gorgeous worship of Pancaratra here (with a trikala puja ritual). Also Sri Ramanujacharya installed the deities of Sridevi and Bhudevi next to the deity of Kurmadeva and did some good renovation on the temple complex. 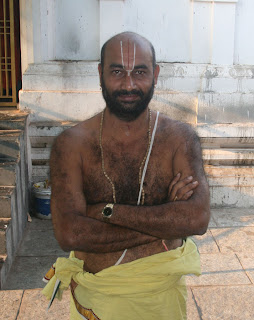 Later in the 14th century Sripad Madhvacharya came here on his pilgrimage to Badrinatha and also did worship personally Sri Kurmadeva here. After some time he ordered to built a special shrine for Sita Rama which is still also worshipped up today. One of his close disciple Sri Narahari Tirtha did stay here and stopped the looting and assault by chandalas to destroy the temple with his personal effort.
And in the famous Chaitanya Caritamrta Volume Madhya Lila 7.chapter Vers 113 -119 it tells about the visit of Lord Chaitanya to Kurma Ksetra in the 15th century. 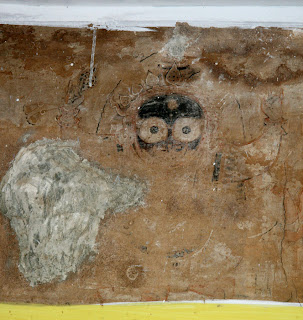