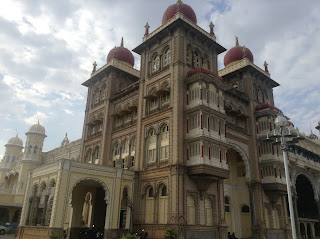 We as family came for the first time with our small boy Prahlada to south india, to study special field of Yoga and classical Music on Veena instrument. I had found out that there is still one of the last legend of T.Krishnamacharya`s disciples living and teaching yoga practise in mysore on the basis on his learning from that great saint and Guru. I had study Yoga branches for some good time and had the great chance in learning my yoga teacher training under a very competent teacher and friend Christof Kraft (www.yoga-kraftquelle.de). But i wanted to add some special branch known as Pranayama and Mudra to my learning on yoga, and that is were this mystical disciple of T. Krishnamacarya by the name BNS Iyengar comes in the picture. 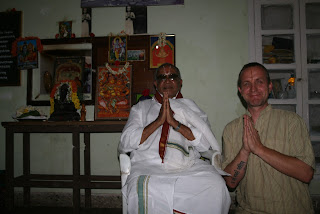 He is not known to many outside of india as his almost same name bearer BKS Iyengar, who even wrote a very elaborate book on Pranayama in the year 1969. But most in all modern yoga schools have forgotten or underestimated Pranayama for their practise, what to speak of Mudras. Coming from the background of pancaratra and rituals i have learned more then 108 Mudras for Rituals, which are mainly hand gestures to invoke the deity presence. But in yoga tradition Mudras are totally something different. They are called "Seals", which are done with the prana while holding a special asana or form posture with the body. To get explored to that kind of secret teaching i booked my family room inside the crowed city of Mysore to study under BNS Iyengar daily pranayama and Mudra sessions for a month. He is a very interesting character, strong in his words, precise in his explanation and can be very strong/rude in his words if you dont catch fast the point he wants to make. "Tapasya", which is what yogaabhyasa is all about, makes the person strong but also "krura", a bit of explosive, angry type of temperament. Anyhow his teaching was very value to me, and it will stay with me for my rest of my life. Asana, pranayama and mudra are not just a weekend play but a daily practise, which are need to be every day expierenced. He has a small school were everyone is invited to come and stay, but mainly in longer term, like one month and more, to really settle the teachings of yoga in your mind/body.